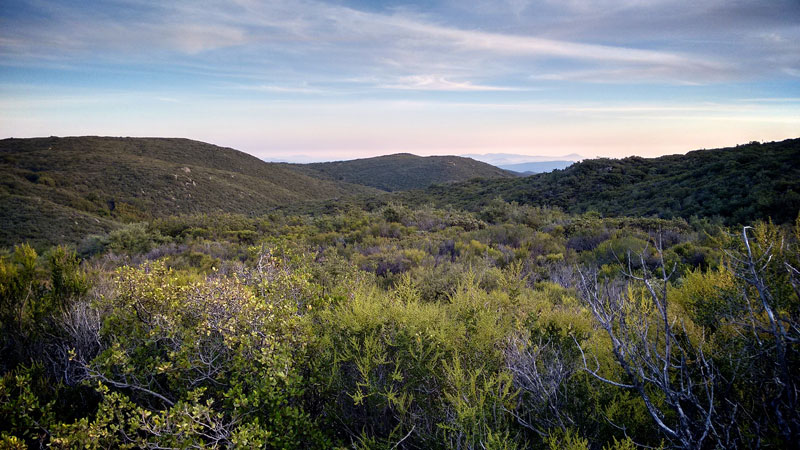 I had been planning a little hike along the PCT from where we left off on our last trip (Lake Morena at PCT mile 20), to the 78 freeway at Scissors Crossing, roughly PCT mile 77. This would be a nice continuation of our journey from the border and would neatly coincide with the way the PCT map pages are laid out – it would complete the first page of the map. My friend Brian said he’d be interested in coming, so we set a date and planned the trip and away we went.

We left my car at Scissors Crossing and I jumped in Brian’s car to head down to Lake Morena. Although my pristine 5-speed 1993 CB7 Honda Accord EX (F22A6) was a hand-me-down from our friends Amy, Joel and Meret, and although it has over 288,000 miles on the odometer, I have become highly attached to it and so I said my goodbyes in case we returned to find it stolen or missing components. As we drove away, I watched it disappear out the rear window and remembered the good times we had shared together. Being a 57 mile trip, we were planning on taking a relaxed three days, camping one night somewhere in or near the Mt Laguna Recreation Area and a second night somewhere further along on the trail. What ended up happening was slightly different and I am still not quite sure why we altered the plan. For some reason, somewhere on the first day, we decided to see how far we could push ourselves and how quickly we could reach our destination. Brian is a U.S. Marine so I believe he is accustomed to hellish experiences from his training and deployments, but would I survive? I wasn’t sure. As we headed away from Lake Morena a couple of hikers snickered to us as they passed: “It’s gonna get real hot, hahhaha,” and although we could have taken this as a bad omen we simply took it as a challenge and cracked open our umbrellas for some shade. They weren’t wrong though, and temperatures quickly rose above 100. In this area of the trail there is no cover or shade, so the umbrellas were literally life-savers, as Brian experienced some debilitating heat exhaustion symptoms and lost his steam. We took plenty of rests and guzzled plenty of water, but Brian was really hurting during the heat of the day. Part of his Marine kit includes a trench-digging shovel which Brian had brought along, to much scorn and amusement from me (the thing must have weighed as much as a brick!). Even after he triumphantly returned from using it to dig and help fill a military-grade latrine, I couldn’t see the wisdom of bringing such a shovel, unless he was planning on using it to dig my grave after my quickly approaching heat-induced demise? Brian’s trail name of Shovel was born.

By about 4pm as the sun started to subside, he came good and his speed went back to normal and away we went again. We continued into the evening and entered the pine forests of Mt Laguna after sunset. The first day we made a solid 22 miles and pulled into Burnt Rancheria campground, lured by the fresh water, at about 8pm. Campsites were few and far between, so we ended up with a reject spot all full of slants and hillsides. Not a problem as I set up Chateau Simon and Shovel’s Deli opened for dinner seatings (i.e. Two-Minute Noodles). We crawled into bed and Shovel tossed and turned all night while I slept like a log, having possibly the best night’s sleep in the multi-billion year history of the universe.

At around 5am we rose and after a quick brekkie headed out, only 36 miles to go! We chatted to some ranger types and after Shovel saved me from accidentally spilling the beans that we had camped in the registration-only campground overnight, I got the two dudes talking about their little Daihatsu truck and we were golden. They wished us bon voyage and we continued north. The morning hike through the Recreation Area was spectacular: beautiful trails through woods, panoramic views and easy, downhill hiking. It wasn’t long until that all changed as we descended below 5000 feet and back to the chaparral-covered hillsides and stifling, relentless heat. We opened our umbrellas and braced ourselves for a grueling day. Again, Shovel experienced severe heat exhaustion in the middle of the day and we took it slow, rested, guzzled water. At one point, we were walking along and heard the unmistakable rattlesnake sound coming from somewhere a few feet off the trail. Stopping to listen and admire, Shovel asked me what we should do. RUN! I said, so we did.

Nature called, as it often does, and humbly I asked Shovel for his shovel (in Marine parlance it’s called an ‘E-Tool’, shortening ‘entrenching tool’, and recorded use of such a device has dated back to the Roman Legion). I quickly laid siege to an area of ground and then laid something else entirely. My perspective shifted, I retreated to Shovel and reluctantly returned the mega-trowel of honor to its protective pouch and handed it back to him. Noticing my look of satisfaction he raised his eyebrows and I ate my words of scorn and derision.

Once the day cooled off again, we continued well into the night, winding our way down a mountain and looking over at the Anza-Borrego desert. This section of the hike was definitely the most difficult, but also one of the most beautiful – my headlamp wasn’t working, but it didn’t matter because the full moon lit our way. During this night-hike section we saw snakes, tarantulas, coyotes and even a deer. About 1.5 miles from our destination my knee started giving me real issues and Shovel patiently waited as I limped the rest of the way. When we returned we were thrilled to see the car still there, all intact! It was 2am so we threw our sleeping stuff down by the front bumper and had a quick nap until morning when we headed off for brekkie at a diner overlooking Lake Cuyamaca, back to pick up Shovel’s car and the drive home. It was a real adventure and we pushed ourselves to the limit on a remote, arid and dangerous section of the PCT. Next time I will hike less distance per day and enjoy the journey a bit more, but it was amazing to see how far we could walk in one shot and I’m grateful to Brian for pushing through.