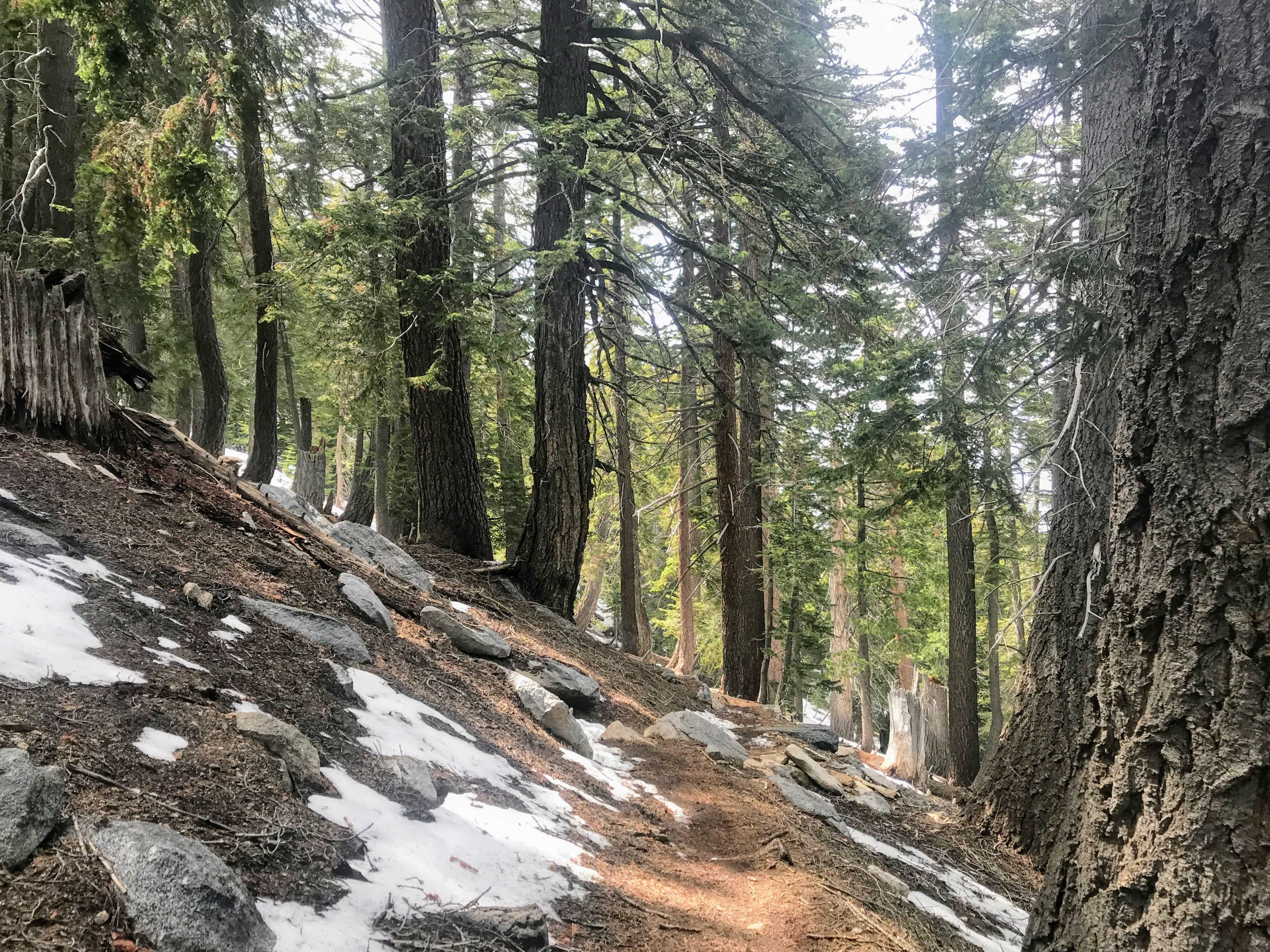 Minor Hardship and a New P.R.

I set out Friday to continue on the PCT, starting from Paradise Valley Cafe and aiming to end up at the Interstate 10 freeway. After parking the car near the trail where it intersects the 10 I hailed an Uber. Given that I was in the middle of nowhere I thought it would take a while for the Uber to come, but he arrived in about three minutes – barely enough time for me to get combobulated.

The driver, Miles, was an older gent with a brand new Lexus SUV. He told me all kinds of information about the area we were traveling in, some of it mildly interesting so that was a bonus. In short order I arrived at the PCT near the Paradise Valley Cafe.

I set off making good time through the still desert landscape, and decided to camp at a magical sheltered spot nestled in a cave of trees about 9 or so miles in. The next few miles are on a ridge and I did not want to be stuck camping on the ridge.

After about an hour I realized that my hip was touching the ground – my sleeping pad had developed a slow leak. I blew it up again but it soon re-deflated. Over the course of the night I realized that camping on regular hard ground isn’t really that bad and I had a pretty good night’s sleep after all. That said, the majority of the coming section of trail was on recently snow-covered ground and would likely be too cold for camping without ground insulation.

So naturally I decided to attempt a new personal record daily mileage challenge and walk almost 50 miles in a day. Once I reached a low enough elevation of trail that the ground would be warm enough to camp without insulation I’d only be about 10 miles or so from the freeway so why not shoot for it.

By 5am I was in full swing, watching the sun slowly rise. The low bushes and chaparral started changing to pine trees, and I walked through a burn area from the recent fires. At one point a huge boulder had fallen across the trail and I shook my head as I scrambled around it, trying not to look down.

Around that point I had run out of water and was getting quite hot and thirsty! After crossing over a mountain pass and round a corner I saw the first patch of snow and picked some up and had a bite – it was fabulously refreshing and crunchy and I kept reaching for more handfuls the entire way to Tahquitz Creek where I paused for a drink and some lunch.

The mountain was beautiful. There was a light covering of snow, and all the precipitation we’ve had this year meant that the streams and creeks were all flowing well and plentifully. I continued past Saddle Junction and the Marion Mountain Trail and headed towards the Fuller Ridge Trail.

At one point while nibbling on some chocolate covered almonds, I thought to myself, ‘Oh I’m almost there, only about 25 miles to go.’ I had plenty of time to ruminate on the absurdity of that thought as I descended down the hill for the remainder of the day and into the evening.

The Fuller Ridge Trail descends along a ridge (i.e. Fuller) from the ~9,000 foot elevation near the peak of San Jacinto and winds its way down to the windswept desert in the valley below. I made it to the famous Snow Creek faucet (a water tap) by dark and began the trek across the valley to the freeway by headlamp.

At the base of the valley is a huge sandy wash, with a winding and difficult-to-follow trail trimmed through the chaparral bushes. Navigation consisted of arriving at a reflective PCT sign and scanning the darkness for another one, then aiming for that. Occasionally a rabbit or a mouse would scurry towards me and scurry away.

The isolated darkness, the noisy ferocity of the wind and the crackling and howling electrical poles gave me the shivers, and I arrived at the car quite spooked.