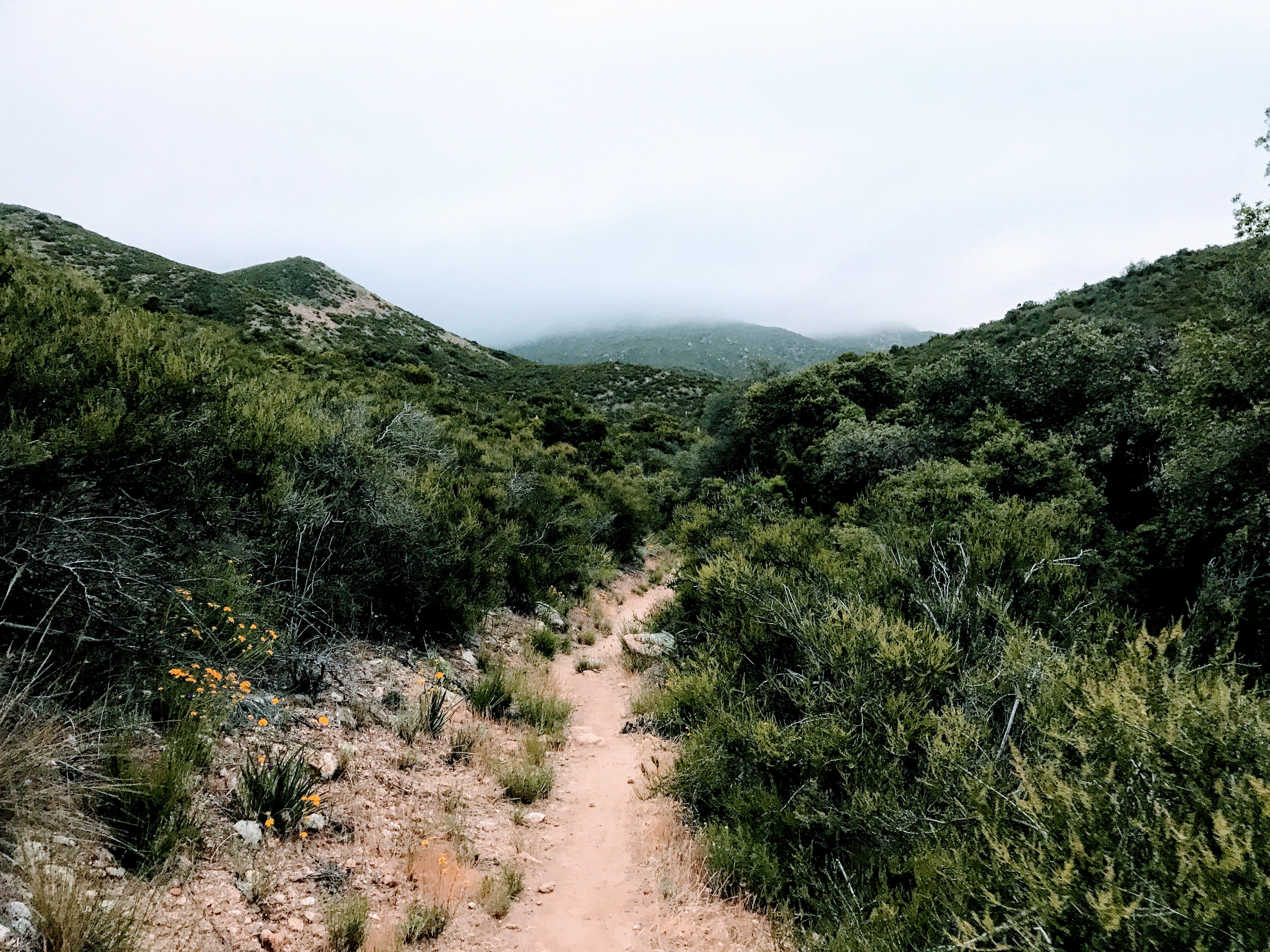 The snow has started to melt in Southern California and PCT season has begun! What better time to continue along the trail than now, along with the rest of the herd of thru-hikers?

I had managed to line up a quick break in work, and Jess and Gabriel were good with me heading out. I took an Uber (actually a Lyft) back to Scissors Crossing, where Brian and I had left off a few years back. This is mile 77 of the PCT. My plan was to travel north, climb up and over Mt San Jacinto, and hitch a ride home from the 10 freeway at approximately PCT mile 209 by the end of the week. I wanted this trip to be a continued equipment and technique refinement as well as a test to see what it would feel like to ‘be’ a thru-hiker one day!

Arriving at Scissors Crossing at about 7:15pm, I walked a couple of miles in the post-sunset light to a small bivvy campsite nestled in a curve in one of the San Felipe hills, using rocks to pitch the tarp, and hit the sack around 8pm, ready for a huge day.

I rose around 5:30am and was walking at 5:45, energetic and feeling great. I saw tons of lizards, blooming flowers, cactus, water caches and other hikers. Just before Barrel Spring, and just as my spirits were starting to drop, I saw a sign: “Trail Magic Ahead”. Some trail angels had set up a table with food and supplies at the Barrel Spring campsite. I stopped for a quick chat and shortly pressed on.

Walking past Eagle Rock and the Agua Caliente Creek reminded me of past trips we had taken together as a family and I began longing to share the trip with Jess and Gabriel. At one point I started to cry even! It has been too long since we have gone on a family trip. Since Gabriel became too big for the baby carrying backpack but too young to crush mad miles we have not gone on really any family backpacking trips. We also moved to the Homestead during that time and have been devoting a lot of time to that as a family rather than backpacking together, and it is something I really miss doing together.

At Warner Springs I had cell service so I gave them a call and felt better after hearing their voices. I camped at the site of one of our previous adventures and had a splendid night’s sleep having hiked around 35+ miles that day.

The following morning I rose a bit late and set my day’s goal to try out a new technique of bush bidet I’d read about before leaving. It wasn’t long until I heard nature’s call and tried out my new technique. It was a huge success and may even have ended up being one of the main highlights of the trip. Absolutely life-changing and I will never look back. Reach out to me if you would like the details as I’m sure most of my vast audience would prefer to be spared the specifics.

I chatted with more people this day, and experienced about five separate trail magic instances. I skipped Mike’s place, not wanting to take his resources given that I was only hiking a short section and he was really catering to thru-hikers.

But I probably should have taken advantage of Mike’s trail magic, because then I found I had run out of water and discovered that the spring I was aiming for was dry, leaving the only water source for the next 15 miles as a disgusting underground cistern full of murky brown-green water with floating carcasses inside, which would require me to lie on top of the cistern and reach in an arm’s length to scoop up some putrid water to filter and drink. As luck would have it, there was a hand-written sign on a piece of lined notepaper sitting on the ground next to said cistern reading ‘Keep walking, fresh water and hot dogs ahead!’. Chad the trail angel was there handing out water, mandarins, cookies and bread rolls, along with a stove he was using to grill up some hot dogs.

After filling up my water I pressed on, thanking him profusely. The landscapes changed as I walked from Cleveland National Forest into Anza Borrego Desert State Park. I stopped for the night at another trail angel’s property, Mary’s Place. Mary’s house abuts the Anza Borrego desert, and she has set up a cute rest stop with lending library and water cache. It was very windy but I shoved my earplugs in and had a great respite.

The next morning I started early again, my goal being the Paradise Valley Cafe. I had heard from potential employment and would need to cut the trip short to be home to take a video-conference. Just after I left Mary’s place, a thru hiker came screaming up at a furious pace and we ended up hiking together, chatting non-stop. By the time we got to Paradise Valley Cafe I realized I had made a lot of great friends and could see how quickly a ‘trail family’ forms.

I tried repeatedly to hail a ride on Uber and Lyft but neither of them were finding any cars out at the cafe, and then Jess offered to drive out and pick me up! What a woman! It was a quick hour and a half until she arrived and I was home by noon ready to take the call during which I was offered the job!

My equipment performed very well although I would like a freestanding shelter and a smaller-volume backpack. The tarp is just so bloody ginormous for one person which is great, but when there are only small campsites available or the surfaces are rocky it can be a pain trying to set it up. I was pretty stoked to have hiked about 75 miles in a little over two days and have no doubt that I could physically do a thru hike in the near future. The challenges for me will be getting Jess and Gabriel to come along and eliminating work that needs unpredictable or ‘urgent’ attention.

← The Mojave Road
Minor Hardship and a New P.R. →