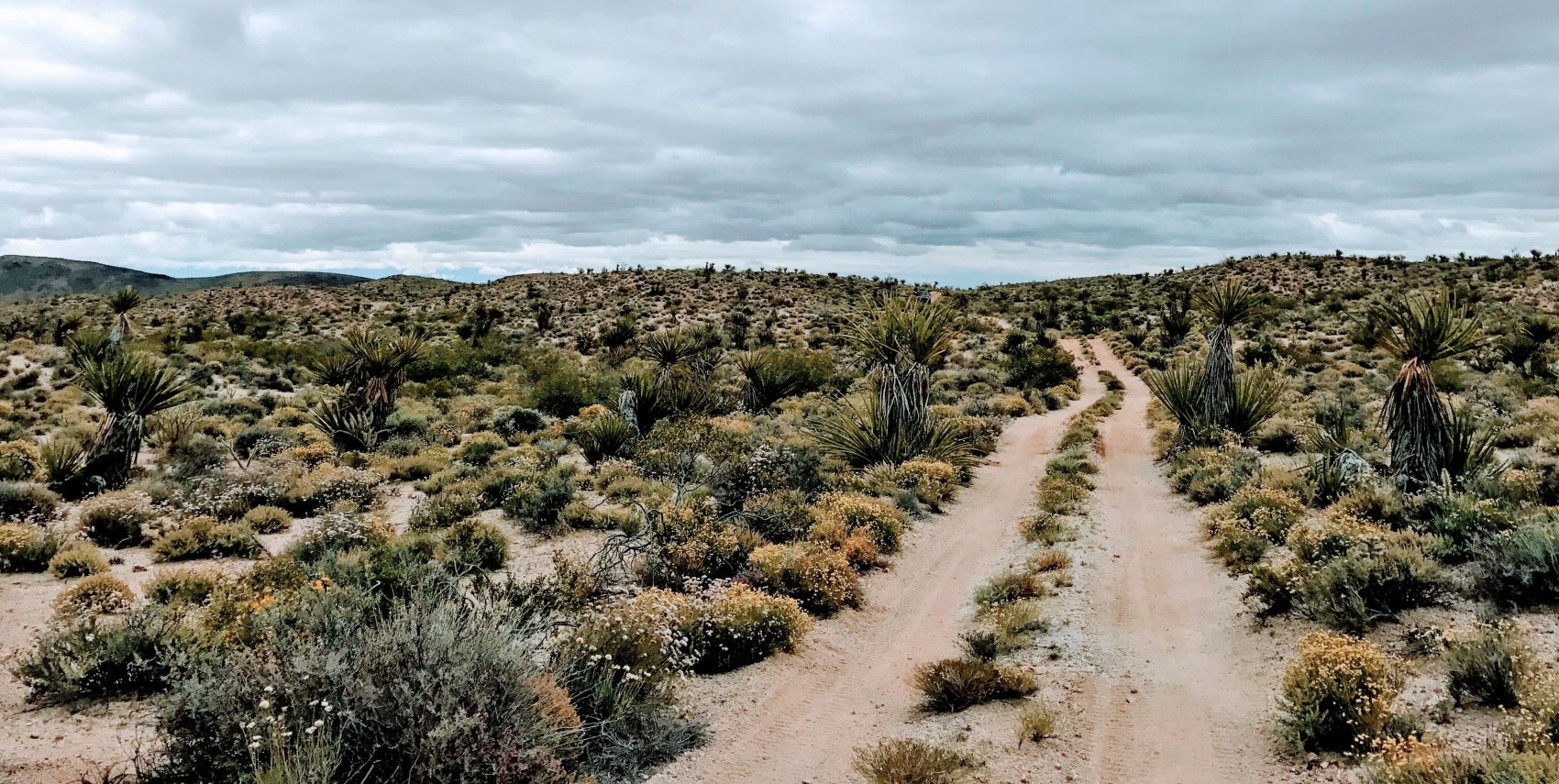 We were pleasantly surprised with a call from Eric inviting us on an ‘overland’ trip on the famous Mojave Road. The road (originally a trail created by Mohave Native Americans) is now apparently one of the great overland trails of the USA, and travels from the Colorado River near Laughlin, Nevada, to a point on the Mojave River, near Newberry Springs, California. It’s mostly a dirt road, with ruts, washboards, some obstacles, mud, sand, one moderately challenging hill and a couple of deepish puddles. Enthusiastically we accepted the invitation, and away we went.

Our first destination was the Big Bend of the Colorado State Park, in Nevada. It’s an RV campground situated on the Colorado, at – you guessed it – a big bend in the river. There are sandy beaches, crystal clear water, and winding trails through desert dunes. We arrived, set up camp and took a couple of walks to see the lay of the land. Later that evening, Eric, Cora and Lyra arrived and set up camp. “Under the shade it feels hot like the surrounding rocks and dirt are pulsing heat from their surfaces, penetrating the air. Yet at the same time a cool breeze winds through offering slight relief from the heat. In the sun it is another story entirely – practically unbearable – oven hot baking from the ground up.

“I am excited for this driving adventure, despite the heat factor. I brought water colors and black & white film, hoping for some inspiration.” – excerpt from Jess’s journal

The next day was blisteringly hot. We started by cooling off in the river, lazing around, painting with watercolors and performing musical recitals. We then took a trip into Laughlin and stocked up on fuel and sundries, and returned to camp to pore over maps and our Mojave Road guidebook. “This morning we walked down to the beach of the Colorado river. The water was cold – around 60 degrees according to the ranger. I went in up to my neck and floated around until my fingertips turned white. It was incredibly refreshing. Now just the memory of it refreshes me and I desire to return!

“It is 2:30pm and soon the table will be out of the shade.” – excerpt from Jess’s journal

Bright and early the next morning we rose and headed off to begin the trek, driving the short distance to Mile 0 at the Colorado River. Jess began at the helm while I read directions from the book and watched the map and compass.

The road was dirt with a few hilly bits and we traveled this part without a hitch, stopping off at interesting points along the way.

“I was stimulated by the variety of textures, light, skies that we encountered on our travels. Big, dramatic clouds across a wide never-ending sky of blue. Next day not a cloud in sight – just open, vast, huge, sky.

“Rocks crunching under tires, then sand slipping us around. Hard baked earth molded into mounds across our path. From low bushy shrubs strewn about a sandy land to colors popping from every direction – yellows, purples, greens, orange-red earth.” – excerpt from Jess’s journal

We were hoping to camp at Rock Springs or Government Holes. But both sites had posted ‘No Camping’ signs and we didn’t want to disrespect the area by camping there, so we pushed ahead along the trail. Our ‘Plan B’ site turned out to have a big pile of decapitated bunny rabbits on it so we decided to press on a bit further, to the Mid Hills campground, an established campground a few miles off the Road. The night was cool and rain was in the forecast so we battened down the hatches and went to bed at hiker midnight. After a leisurely breakfast we hit the road again, hoping to make it to Afton Canyon by the evening. “Tall, majestic Joshua trees adorned with their festive needles spiking upward – within the high desert, a section of road carved deep like a slender river snaking through a landscape of celebration – the Joshua tree forest thick with bright yellow flowering plants… what is it, we wondered, that that made it appear so… festive? I thought the Joshua tree needles looked like tinsel.” – excerpt from Jess’s journal Throughout the trip Jess had been taking shots with her black & white film in an old manual camera and I could tell she was pretty inspired and excited to see her shots. When we got home and she tried to rewind the film, she found that the film hadn’t properly loaded itself, and all her black & white masterpieces had not been recorded! What a disappointment! We’ll have to go back and try again!